The Gathering of the Farm Cideries: Recap 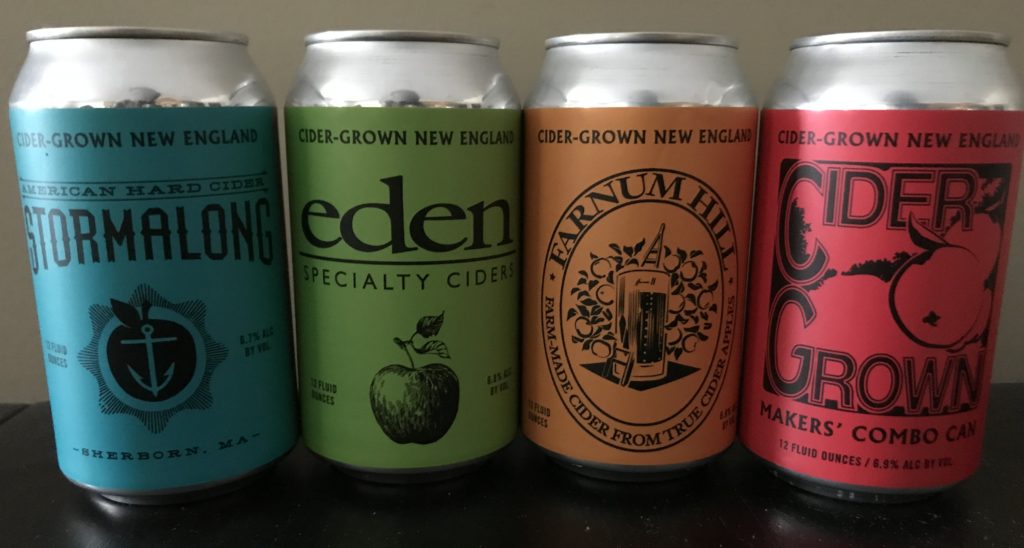 Cider Grown is a collaboration between Stormalong, Farnum Hill, and Eden to bring you the best of New England ciders! Each of these three cideries have collaborated to bring you the best of New England’s cider-grown ciders! In this 4-pack, you’ll receive one specially made cider from each of the three companies, as well as a fourth cider, the Markers’ Combo Can, featuring a collaboration from all three! These ciders are really something you don’t want to miss out on!

What Does Cider Grown Mean?

Cider-grown apples are exactly what they sound like, apples that are grown specifically for the production of hard ciders. When bitten into on their own, these apples will seem bitter and highly unenjoyable. When fermented shortly after harvesting, however, these apples make some of the most complex and delicious ciders you’ll ever experience. Cider-grown apples are very rare in the United States, meaning that many ciders and cideries cannot actually call themselves “cider-grown” as they use what we refer to as “table-grown” apples. The most important thing about cider-grown apples is that they shouldn’t be picked when crunchy as they are not fully ripened at this point. Rather, these apples are left to soften, so that all of the fermentable sugars are readily available for the cider-making process. At this point, they are harvested and begin to undergo fermentation as quickly as possible.

Stormalong’s cider is medium golden yellow in color, fairly carbonated, but settles quickly, and smells rather dry and tannic. Its flavor profile was described by Stormalong as “dense ripe apple, rhubarb, chocolate, and caramel.” I definitely picked up on the rhubarb and apple with more apparent tart notes during the sip and didn’t pick up on the chocolate and caramel tones until the aftertaste. The flavors in this cider definitely evolve throughout the sip, from tart to bitter, to sweet, with a bit of a tart feel remaining on the tongue and especially the roof of the mouth. Overall it is pretty dry and tannic with a complex flavor profile. This cider, surprisingly, has the lowest ABV of the four at 6.7%.

Farnum Hill’s cider also poured a medium golden yellow in color with roughly the same carbonation as Stormalong’s. The scent is reminiscent of many fruits, including apples, pears, and notes of citrus. It was very apple-y and tart at first, with a strong apple flavor remaining through the finish and accompanied by a touch of what I interpreted as peach. Although delicious throughout the entire sip, I found the aftertaste to be the most enjoyable part of my experience. This cider was the slightest bit sweet, but definitely the driest of the four, but in a pleasurably crisp and refreshing way. Farnum Hill comes in will an alcohol content of 6.8% ABV.

Eden’s cider is described as having a “sweet and salty aroma,” which I would have to agree with. It appears very similar to the previous two in color and carbonation, but is very different from the both in flavor. I would describe this cider as bitter, sour, herbal, and funky. It isn’t exactly what you’d expect after the smell, but definitely has a lot of different flavors than what you’d normally expect from a cider, including one that is almost mineral-y. In my opinion, you kind of get hit with all of these differing flavors, yet the flavor remains “flat” throughout the sip and tasting experience. This goes to say that all of the flavors somewhat meld into one and you don’t experience a differing flavor profile as it moves back along the tongue. Eden also describes their cider as having an “umami finish” but as I said, I didn’t experience any differing flavor profile throughout the sip so I can’t say for certain that I agree. Eden’s Cider Grown cider also comes in at a relatively high 6.8% ABV.

Finally, the one you’ve all been waiting to hear about. The Makers’ Combo Can, a New England CiderGrown collaboration between Stormalong, Farnum Hill, and Eden cider makers. As with the previous ciders, the Makers’ Combo was a medium golden-yellow brown and slightly less carbonated than the others. The similarities are likely due to the similar varieties of cider-grown apples chosen for each of these blends. Upon opening the can you’ll notice a strong scent of apple cinnamon. It smells fresh, warm, and delicious, reminiscent of a freshly baked apple pie. It is a touch citrusy, making it somewhat sour, as well as sweet with a honey flavor. This collaboration is off-dry and comparable to an ice cider. The aftertaste is tart, especially in the lips, although it is very smooth to drink. I would have to say that the Makers’ Combo Can is my favorite of the four. It’s the epitome of a “cider-grown cider” and definitely did not disappoint. This cider has the highest alcohol content of the four, coming in at 6.9%.