What’s the Difference Between Cider and Beer?

Something that we notice at bars or restaurants when the waiter comes over to a table or a group approaches the bar is someone asking for a “cider beer” or “apple beer” or confusing the two in some fashion. Even waiters or staff that are partially trained say the exact same thing. Everyone seems to think that cider is beer. It’s so common that we even created a shirt to help prevent the spread of misinformation.

Hard cider is not beer. If anything, cider is closer to wine, but cider is cider. What is the major difference between beer and cider and why are they not the same?

Beer is fermented, just like cider or wine, but beer is brewed with malt, yeast, and hops. Beer is often very carbonated, can be dark or light in color, and can be thin or thick in its consistency.

Hard cider is generally fresh-pressed juice, mostly from apples but can contain other juices/flavors, that are combined with yeast to ferment. In the US and other regions, to be considered cider, they have varying scales of what percentage of the juice must come from an apple. While cider is carbonated, there are still ciders and low-carbonation options. Cider is often lighter in color, unless other juices are added, and have a thinner consistency.

What’s the biggest difference between beer and cider? Cider does not contain malt or hops. The major similarity is that both are fermented using yeast. Just because it is fermented does not mean it is beer. While both use yeasts in the process, it is common that cider uses wine or champagne yeast strains, often called “cider yeasts”, to make their product. Beer often uses either a lager or ale yeast. While there are yeast crossovers and some beers that use champagne yeast, it is still a common split between the two products to use the more traditional yeasts.

Cider also often adds sulfites to protect flavor and longevity like wine. Beer doesn’t often have added sulfites. This is not all to say that sulfites are added to all cider or wine. Grapes, hops, and other ingredients can have natural sulfites, but some are often added to elongate the product’s shelf life. With these items being the case, apple wine or wine, generally, are closer in relation to cider than beer. To compound the similarities, wine and cider both contain fermented fruit and similar yeast strains, so they are more closely related. But, hey, we came here to talk to beer not being cider and cider not being beer.

Additional differences? I’d like to mention that most ciders are gluten-free. Beer generally has gluten, but there are gluten-free beer offerings out there. Cider can also contain more sugar than beer, on average. It is important to look at the nutritional values and ingredients to make sure it aligns with what you are looking for and to show deeper differences. Cider can be healthy even if they have sugar and calories! Beer & cider can sit at the same ABV, but, in general, beer can have a higher ABV. There are high ABV ciders, by the way!

Interestingly, over time, cider and beer have been crossing over in their use of yeasts and hops that were usually locked to either cider/wine and beer. Hopped ciders are growing in popularity. These ciders pick up most of the hop’s characteristics as there are fewer apple flavors to mask the hopped punch. There are also more craft apple beer offerings coming into the market, too. That is either beer that has apple juice added towards the end or using apple juice within the brewing process with the malt and hops.

You can see, now, that there are major differences between beer and hard cider. As the craft industry keeps turning, you can see that there is more overlap between the two distinct products as there are gluten-free beers, hopped ciders, and beers/cider experimenting with different yeast strains. In respecting the craft of beermaking and cidermaking, we must understand the history behind both. The art of making cider is much different than beer as it revolves around the apples used. As that is the core of cider, it’s vastly different than beer and should end the consumer questions about “cider beer”, hopefully. 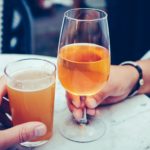