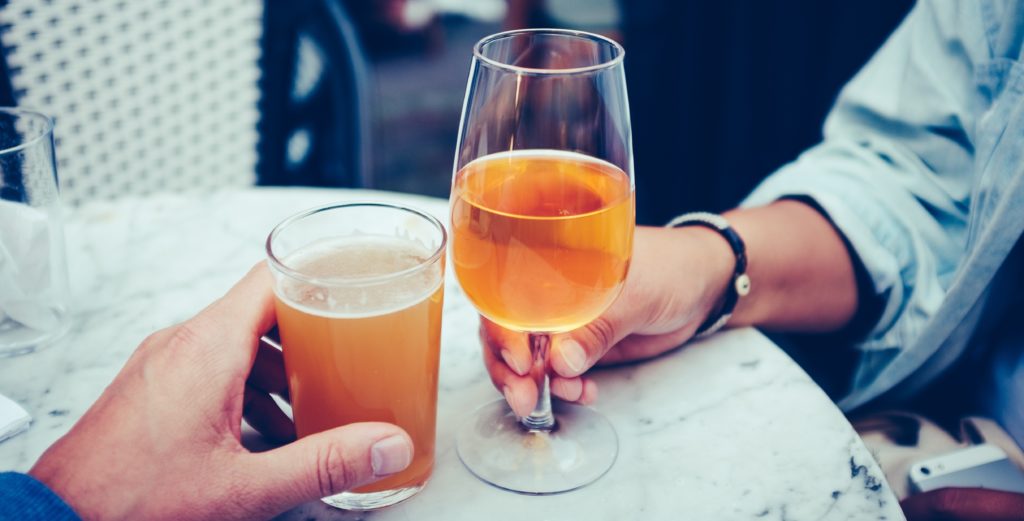 What is the difference between a sour beer, a graf, a cider or a fruit ale?  They all seem similar in some fashion, but far from siblings. From pure inundation or inability to identify what is what, consumers have options to wade through. We like to think that many of these options can lead drinkers straight to cider.

Like wine, which carries characteristics of cider, sour beers and grafs have elements that a cider drinker really would enjoy.  So If you have any friends or are yourself a sour beer lovers and want to understand what’s in your glass and why cider might be a viable option, keep reading.

Sour beer, by definition, is a beer made with wild bacteria and yeast that creates a taste of tartiness or sourness.  This was actually an old technique of brewing beer before we developed techniques to control the fermentation and pasteurization of beer.  The best part of sour beer is how it can be made to taste fruity, yeasty, funky, slightly sour, or mouth-puckering dense.

As we stated, sour beer gets its character from an assortment of wild bacteria and yeasts.  The particular forms of bacteria involved are lactobacillus and pediococcus.  These will add the sour tastes and acidity, respectively, while wild yeast, like Brettanomyces, adds earthy tones to the beer.  Over our history, brewers have created multiple definable types of sours. These include lambics, Flanders, Gose (which is growing in popularity), and many more. These sours are made with either different variations of the bacteria & yeasts above or different forms of the bacteria or yeast. Either way, sours open the flood gates to some funkier, more entertaining flavor profiles.

What is a Graf or Fruit Ale?

While the Graf is ill-defined or part of a cultural phenomenon from the Dark Tower universe, it is another space that is coming forward.  A graf is essentially apple juice or cider mixed with beer wort and fermented with ale yeast.  It can also be defined as cider with malted barley and hops.  Whatever your definition is, this is a hybrid of both worlds. One group killing the graf game is Sociable Cider Werks. They are creative, flavorful, and artistically crafted for your enjoyment. If you find yourself in Minneapolis, Minnesota, give them a visit.

The line continues to blur as we move into apple fruit ales or beer brewed with apples in it.  Blake’s Orchard is a great example of a company pushing the boundaries with fruit ales, appealing to the in-between market.  Some beer companies will use extracts, concentrates or syrups for their flavors in place of real fruit — this really blurs or opens up what could be considered a “fruit ale”.  While something like a Graf may be a newer or recently popular beverage, fruit beers have been around in history like a Framboise, which is made with raspberries. This phenomenon started as early as 1930 in Belgium. They actually started by making a lambic with cherries. So, that means it was a sour beer with fruit, which makes it a fruit ale, too. I know.

See? They all kind of blur together like all four years of high school. Maybe a graph (not graf) of what commonalities they have with cider will help you understand what you may like as a cider fan testing beer or a beer fan trying cider.

Infographic: Sour Beer, Cider and all in between

As cider has developed in the US, so has the different varieties of the cider itself.  The increase in funk and naturally-fermented ciders could pay dues to the popularity of sour beers,using some of their defining flavors.  The line is increasingly blurred, too, for cider and sour beers as they use fruit, too, like fruit ales. The flavor profiles of tart, sweet, and funky can be nearly identical to those of fruit ciders. Obviously, grafs are cider, in part, so they must be brothers. What is nice about alcoholic beverages is how many walls they can share and how the three or four options we discussed can be any which one at any given time — depending on how they were created, of course.

May it be a sour beer, graf, fruit ale, cider or fruit cider, there is some variation in the mix that will suit your fancy. And we encourage you to try a hybrid or something new, like a graf. You may just surprise yourself.